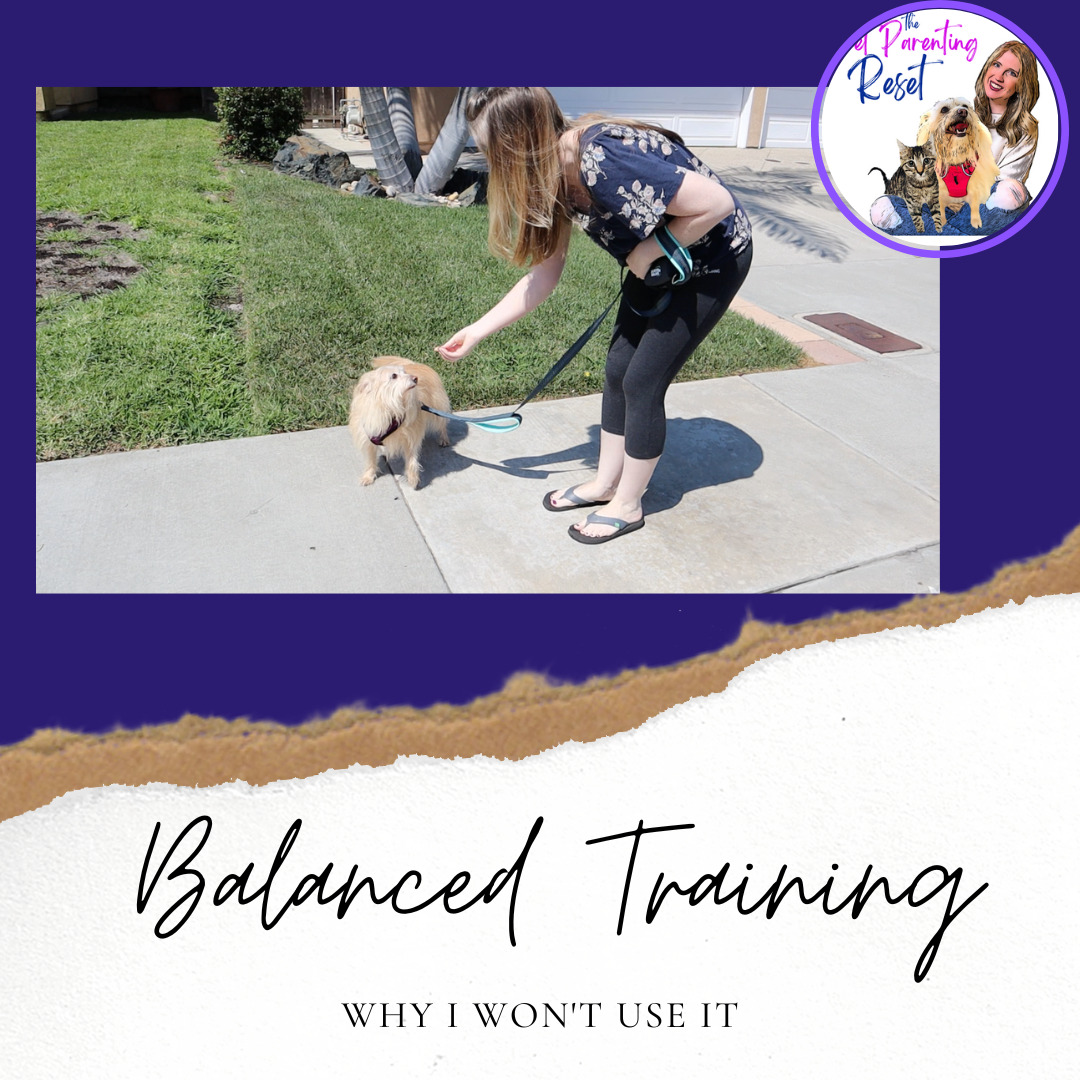 Zak George has been making some waves lately talking about men in the dog training space demeaning the women in dog training and he made a correlation to the fact that women are more likely to subscribe to positive reinforcement training because it is science-backed.

Disclaimer: I know you’re reading this because love dogs, you love your dogs. I have no intention of bashing or demeaning anyone with this post. My only intention is to explain my reasoning for choosing positive reinforcement, and why I do not subscribe to other methods of training that you may use.

What Is Balanced Dog Training?

Balanced dog training is any approach to dog training that uses both positive reinforcement and aversive training methods to achieve behavior modification. That means that a trainer can use both treats to reward and a shock collar to punish (negative reinforcement), or that a trainer could use both treats to reward and take away their favorite toy for an unwanted behavior (negative punishment).

The big question here is this: Is it ever necessary to use punishment, physical punishment, in behavior modification? If so, what scientific proof is there to support this reasoning?

Of course, the two scenarios I mentioned above are nowhere near the same thing. I understand how most of us will, at some point, use negative punishment from time to time, without realizing that’s what it is.

As a dog trainer, being someone who is responsible for teaching people appropriate interactions with their dogs, the person that gets asked all the questions about how to parent their dogs, being the person who has to go home at the end of a training session and know that I gave that pet parent the best possible information to train and raise a happy, healthy dog to thrive in that household, I have to make a choice on what I feel will best benefit that dog and strengthen the bond between that dog and their parent.

Why I Choose Positive Reinforcement (and not Balanced Training)

Let’s start with the inspiration for this post. According to Zak George (I will list all of his references below), “In learning theory, the principles that govern how all animals learn, punishments and aversion are actually never required. There is no known instance in the animal kingdom where using physical punishment is required to create new behavior or to stop unwanted behavior.”

Positive reinforcement dog training uses a rewards-based system to encourage behaviors that we want our dogs to do. I often explain it to clients like this: Mammals do not learn in negatives. Humans and dogs alike learn best when they are directed to the appropriate behavior. Simply saying “no” does not provide any direction, and this is why training in negatives is so difficult and ultimately does not work. By rewarding the behaviors we do want to see, our dogs (humans as well) are more likely to choose the behaviors in the future that provided them a reward.

The use of fear and pain has long-term implications on your dog, often leading to fear and anxiety-related disorders, not to mention the health effects of consistent cortisol level increases in your dog in response to fear and pain.

The bottom line here is that balanced training uses methods that correlate with increases in fear and anxiety in dogs, not exclusive to training sessions, which in itself is difficult to manage but fear and anxiety in dogs can also lead to more severe behavioral issues such as incessant barking or growling, and resource guarding just to name a couple.

Leaving Alpha Theory In The Past

Alpha Theory was derived by dog trainers from research conducted by David Mech et. al. looking at wolves in captivity. The wolves studied were captured from around the world and placed into an enclosure together. From the findings of this study, Pack Theory and Alpha Theory were born into dog training.

This study was incredibly flawed as it in no way replaced how wolves actually live in the wild. Mach has spent many years debunking and rebuking the research that he and his team put out into the world back in the 1970’s. He has tried for many years, so far unsuccessfully, to have his book removed from publication because of the damage it has done to so many dogs around the world.

Dogs are sentient beings and they, like other wolf counterparts in the wild, live in family units. Family units consist of one breeding pair and their offspring. Sounds an awful lot like your family unit, doesn’t it? While it makes since that this family unit would be referred to as a “pack” there are negative connotations associated with this word and there is a strong push from the force-free training community to end the use of the word. Dogs International has an excellent article on why we should put an end to the use of the word “pack.”

Using alpha theory and physical dominance over your dog can and will end badly for many dogs and their owners. The use of physical force tells your dog “it’s my way or else” but it completely eradicates the bond that you and your dog should be sharing. When you work in cooperation with your dog, they are much more likely to follow your lead, while using fear-based training will ultimately lead to your dog having to choose to growl and ultimately biting to escape situations. Essentially, your dog can’t trust you and therefore you can’t trust your dog.

That’s no way to live, to coexist. Using rewards-based training allows your dog to understand the behaviors you want to see, while also providing them the appropriate framework to get there. Barks From The Guild has a good article on why we need to leave Alpha and Pack Theories in the past.

The example that Zak uses in his video is breaking up a dog fight. The appropriate way to break up a dog fight is to distract the dogs using some noise (usually the louder the better) to startle them to distraction. Some people will also physically break up a fight by interjecting themselves between the dogs. While I can’t suggest that approach due to the likelihood that you will also be injured, I have done it and understand how that is our first instinct to protect our dog.

The distinction here is that the assertion is done in the moment as an act of desperation, and is not how you would train a dog not to fight with another dog. In reality, dog reactivity to other dogs is a complex issue that requires a well-thought-out plan to help the reactive dog alter their perception of other dogs.

For me, what it all comes down to is not changing every single interaction a pet parent has with their dog, but instead, providing them the framework to better understand how their dog thinks and learns, and giving that pet parent the tools to modify their dogs’ unwanted behaviors while keeping their bond healthy and thriving. I can’t be so naive as to think that a dog parent will never raise their voice at their dog, or even that they won’t forget their training and snap the leash when their dog pulls from time to time out of frustration, but what I can do is provide them with a roadmap to come back to in order to mend their bond with their dog.

This is why I choose to only present positive reinforcement methods to my clients.

Training dogs with the help of the shock collar: short and long-term behavioral effects

The effects of using aversive training methods in dogs

Does training method matter? Evidence for the negative impact of aversive-based methods on companion dog welfare 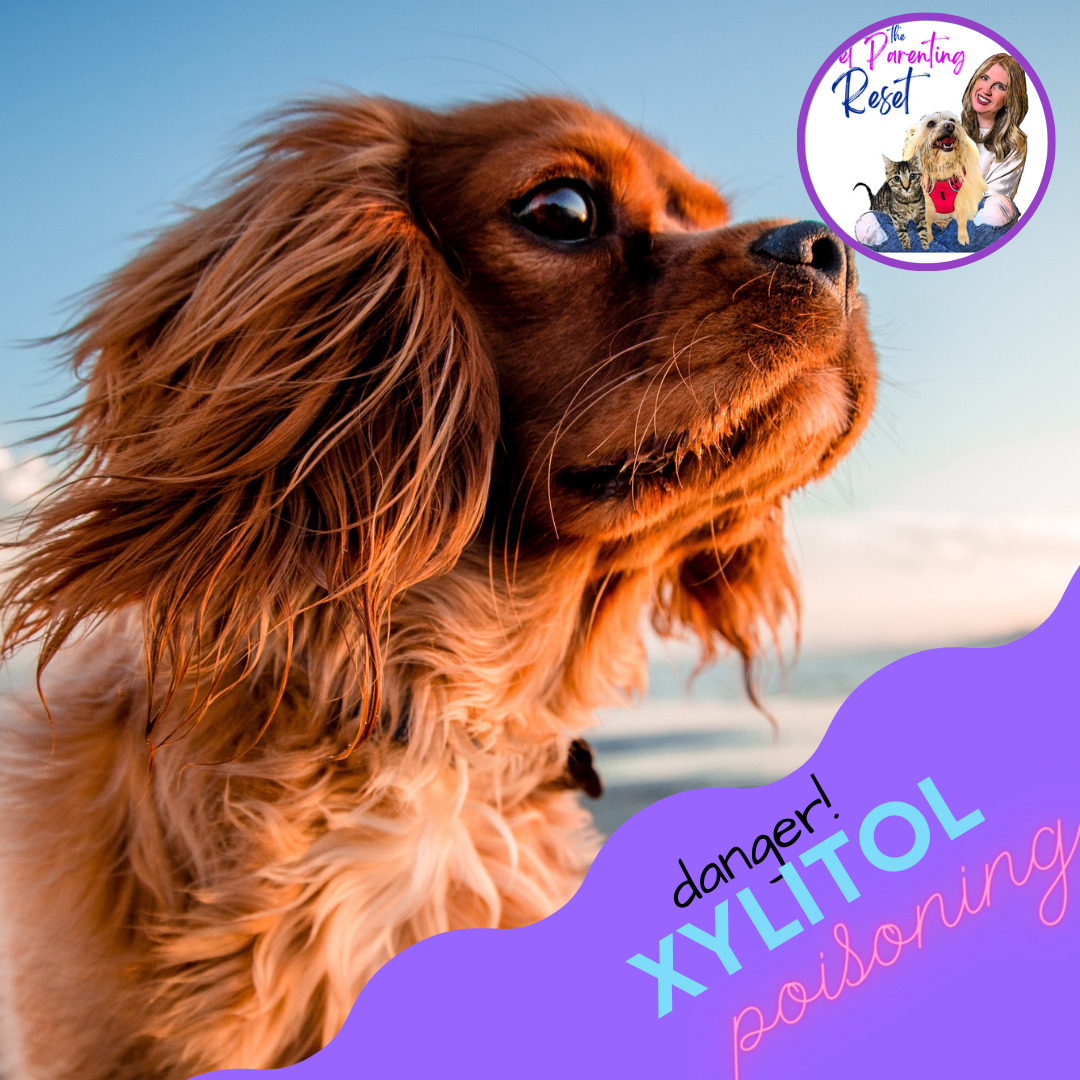